String is hung from crop wires which support the plants. The plants are either wound around the string, or clipped to the string weekly.  Other weekly tasks include putting supports on the truss stem, to keep the tomatoes from falling off when they get big; pruning the plant of excess leaves, and tomatoes (too many tomatoes reduces the fruit size);  And finally, each week plants must be leaned and lowered. Amazingly, the plants will grow up to the support wire, and need to be lowered. When the crop is complete in late summer, plant length can reach up to 20 feet!

WHAT'S AN HERILOOM?
Heirloom tomatoes are generally open pollinated varieties. This means that the seeds will produce the same plant year after year, as long as there is no cross pollination during the pollination of the tomato. An heirloom variety does not produce as much as a hybrid and has less disease resistance. Therefore more plants, space, fertilizer, and labor is required to get the same production as a hybrid. Hierloom tomatoes come in different sizes, shapes, colors.  Some are firm, some are soft and mealy.  Blaine continually tries different varieties each year to see which ones will give good taste, size, and appearance. Beyond the familiar red varieties, we ensure customers receive a variety of colors, shapes, and sizes including orange, yellow, green, and purple as well. However, knowing what is tried and true, Blaine won’t venture far away from the standard heirloom varieties of Brandywine, Cherokee Purple, Striped German and Green Zebra. 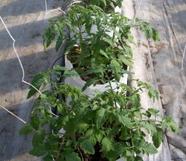 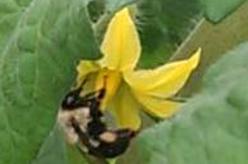 In the outdoor environment, tomatoes are pollinated by wind and/or bees.  Plants grown in the greenhouse are not exposed to these pollinators, so bumblebees are brought in to do the pollinating.  Bumblebees are ideal for pollinating because they are not as aggressive as honey bees, so they won't go after other forms of pollen outside the greenhouse.

Since bumblebees are used, biological control of insect pests is very critical.  The crop is grown without the use of synthetic pesticides, and insect pests are controlled with various predatory insects like ladybugs!

The bags sit on a gutter that collects the drain water, and it is re-circulated, therefor preventing leaching of nitrates into the land.  Each plant is fed water and nutrients via a feed tube.  A computerized timer is set to give the plants water based on solar light.  For example, plants get less water on cloudy days than sunny days.

There are 100’s of different varieties of tomatoes.  Hybrids and Heirlooms are what we grow. 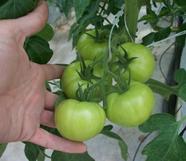 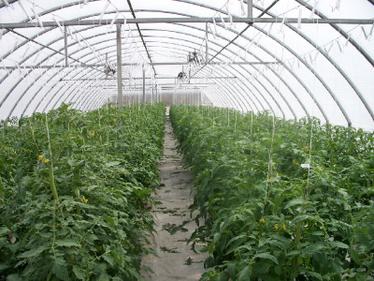 It is a nice firm red beefsteak tomato, that once you taste it, you will swear it came from the field. Greenhouse tomatoes have gotten a "bad rap" as being "blah", tasteless tomatoes, not Blaine’s tomatoes.  Blaine’s hard work, long hours, and multitudes trial runs have paid off to bring you a wonderful tasting tomato.  Unlike grocery store, flavorless tomatoes, picked on the green side so that they can be shipped across the country, or imported, Blaine's non GMO tomatoes are fully ripe, right off the vine, so you have to eat them as soon as you get home!

HOW DO THEY GROW?
The plants are grown in a composted media, from a local nursery thus economically and environmentally friendly.  After the bags have been used for tomato production, the soil is incorporated into the field soil to provide rich organic matter for the plants grown the following year.

WHAT'S A HYBRID?
The hybrid tomato we grow is traditional one that is a cross between two varieties.  A mother plant and a father plant are cross pollinated by hand to produce a hybrid. Hybrid tomatoes ARE NOT GMO's (Genetically Modified Organism).  A typical hybrid tomato varieties include "Early girl", or "Celebrity".  Hybrids generally produce more then Heirloom varieties, look more uniform, but lack the taste of an Heirloom……..Except ours!! Blaine has worked many different varieties, and has found one to be of exceptional taste.